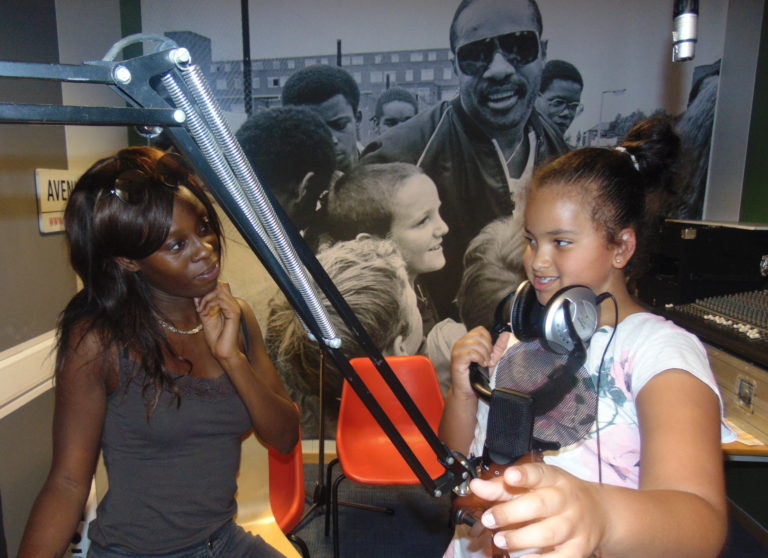 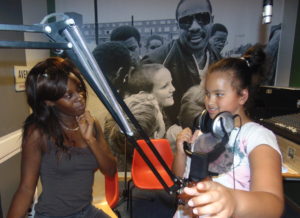 The Avenues Radio has been a key part of The Avenues make-up for as long as most of us here can remember. The specialised equipment allows our young people to learn exciting new technical and social skills that build self esteem, whilst having fun and blazing their favourite tunes loud in the studio. However, after the cuts to our funding a couple of years ago the Radio station was one of the main areas to suffer, as specialist staff had to be reduced and funding for our FM license was revoked.

Our beloved radio station was in danger of becoming forgotten, with the once vibrant and energetic room beginning to gather dust and the 24 hour radio coverage (now on digital) serving only as a relic to previous shows and former youth club glories.

That all began to change however with the arrival of Nicole, who brought with her many years of radio presenting experience for Reprazent Radio, Beat London FM and more, whilst also being a mentor for young people looking to get into the media industries. Since starting as a volunteer over 2 years ago, she now plays an integral role in developing and improving the radio services we offer, bringing them in line with current trends, shaping the future of our Radio station to what is still a minuscule budget.

“I deliver radio training to all sorts of kids between the ages of 8-18, developing skills such as mic technique and interview technique, we discuss thought provoking issues that really help the young people’s confidence and communication, making them aware that they can use the space to talk about things that are important to them”

Nicole talks about how rewarding the work can be for her, as she follows the individual progress of some of our most shy and reserved young people, watching their confidence blossom as they are given the opportunity to share their voice and thoughts with the world.

“One of our young people, who is autistic, found it very difficult at first, as he struggles to articulate and string sentences together unless you say it for him first. He really began to enjoy the tech side, moving the faders and dials. That helped his confidence to grow as he began to feel more involved. Now he doesn’t need nearly as much prompting when he’s in front of the microphone”

The activity is especially popular in the holidays and Nicole says she has now trained up to 100 young people at the Avenues with around 80% of our regular attendees being able to operate the equipment independently. In recent weeks they have conducted some big interviews, such as with as Joseph from the Westminster Gangs Unit, who have been working on raising awareness of the dangers of gang culture with our teenage members.

The future is now looking bright for Avenues Radio, after we approached the BBC earlier this year to form a strong partnership moving forward. “There will be loads of opportunities for the young people which feed into a new way of working, where workshops and activities are influenced by the academic curriculum.” Carol Archibald (Programme Manager). One of these is the BBC Young Reporter project that encourages young people from 11+ to research and report on news that is important to them, with a handful of our radio trainees recently attending an introductory event at the BBC Broadcasting House

Nicole “we’ve been assigned a mentor from BBC who in the new year will be working on delivering a number of workshops to understand the various platforms for listening to news. There is another upcoming trip to the BBC for our young people where they will learn about the different roles and responsibilities that are involved in making a news story”

Another young person that Nicole has been working closely with has been using the skills she’s learning in radio training to express her interest in blogging and vlogging. “She now wants to create her content on YouTube. She had no idea that these techniques even existed. She is one of the budding young people we think will really benefit from the BBC project. This is a great introductory step for us towards delivering a program around creating visual content.”

2019 will see the Avenues radio broadcasting live shows across the week (something that hasn’t been seen for quite some time), including more interviews with social media influencers and other collaborations in the pipeline that will look to expand our partnerships, including some off site broadcasting events to raise awareness and revive the station from its former dormancy.